Equipping you with measurement for tanks hauling hazardous liquids.

The SeeLeveL Special system is designed for tank trucks hauling flammable liquids, and it provides an accurate digital readout of the fluid inside the transport tank. The all-digital design eliminates reading drift, ensuring long-term accuracy under all conditions without the need for costly and time-consuming re-calibration. The intrinsically safe fiber optic connection makes it suitable for both hazardous and non-hazardous applications.

A variety of configurable components have been developed for transport applications such as tank level gauges, spill prevention, loading rack controller, grounding control solution, and related accessories working together to provide solutions for your liquid management needs.

Let us assist you in finding the right system that meets your operational goals.

The SeeLeveL Special is a versatile digital continuous level measurement system that may be used for basic fluid level monitoring and has demonstrated reliability for over 20 years. It is widely used in the crude oil transport industry and can also be used in other similar applications where flammable liquids are transported. Additional systems can be integrated with the SeeLeveL Special to improve functionality and meet the operational needs of customers. See additional support products below.
Features
Operation
Resources
System Includes
Other Required Parts
Optional Parts
Features
Operation

The 808-P2 operates using a magnetic reed switch sender bar detecting the float magnetic field. The system provides a stable resolution of 8 mm (1/3”) and the fixed position of the reeds eliminates any need for recalibration during the life of the gauge.

Under normal loading conditions, the SpillStop is wired an external warning horn and the loading pump.  When the tank is being filled, the SpillStop will activate the warning horn and first level shut down at the alarm 2 set point pre-programmed in the 808P2.  The alarm 2 set point is used to alert the operator that the tank is nearing full.  Once Alarm 2 is activated, the horn alarm will sound AND the pump will shut off.  At this point, the operator can press the bypass button on the SpillStop to silence the horn and regain the pump to clear the hose.  However, if the operator continues to load to alarm 1 (High level shutdown)also pre-programmed in the 808P2, the pump will shut off and will not power up again until the tank level drops below the alarm 1 set point.  Alarm 1 is used as a high level emergency shutdown and cannot be bypassed.  As an added feature, the SpillStop can be wired to a pressure switch on the load line.  If pressure on the load line spikes due to a valve being closed, the SpillStop will immediately shutdown the pump preventing hose blow-out. 817 Truck Gauge Programmer v3.2.2 (select the button below to download the software) 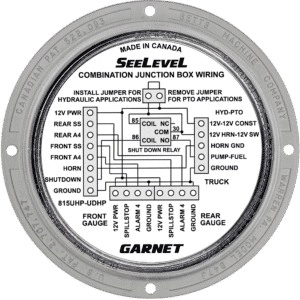 The SeeLeveL Junction Box, which include a relay, can be used to simplify wiring, reduce cost and increase reliability.
Previous
Next